Skip to content
Home > The US Review of Books – Citadel 7

“Oh Goddess! Rudy thought to himself. Insidia looked to Rudy and whispered, ‘She can’t help you now.'”
Rudy Barabbas, a Jamaican cab driver trying to eke out a living in San Antonio, Texas to create a better life for him and his girlfriend, ends up involved with dangerous characters as a result. After trying to cheat in a dice game and getting caught, Rudy ends up in the pocket of the Caracara criminal family, working as a courier for contraband using his taxi cab in secret. On a late night shortly before his shift ends and while set to deliver a package to the Caracaras, a mysterious man gets into Rudy’s cab unexpectedly. The client is Walter Kneebone, a serial killer known in the area as the Keyhole Killer. This chance meeting puts Rudy in contact with an Ultra Demon named Insidius and places him squarely in the middle of a conflict for the souls of humanity, putting his life in great risk.

Like the other Citadel 7 novellas, this one is a self-contained story that builds toward a larger plot developing across time periods and the known and unknown universe. Rudy’s story is a familiar tale of an ordinary person being caught up in extraordinary circumstances, but the level of imagination and creativity on display create something totally unique. Rudy’s encounters with the benevolent Dogg and the sinister Insidio and Insidia create memorable scenes full of action, suspense, and the supernatural. Despite his mistakes, Rudy is eminently likable and an easy protagonist to root for even as he gets himself into increasingly worse situations. On its own, this story will leave readers with plenty of questions and incentive to read the other stories in the series, while fans of the franchise will gladly devour more of the author’s signature style. 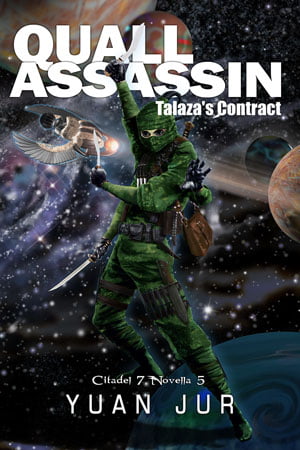 “‘For what you have done to my Analuke, I allow you to see my true face. Consider this a parting gift.'”
On the planet Tora, a conflict of warring clans is threatening to bubble up to the surface and bring the entire continent of Ludd into battle. Talaza and his wife Analuke belong to the Quall, a four-armed race of assassins that live in the mountains, stick to the shadows, and carry out their contracts with precision and without mercy. When the couple receives orders to ambush a supposed peace talk between the warrior clan of Scarzen and the duplicitous Flaxon, they have their reservations but are honor-bound to fulfill the request. Before he can finish scouting, Talaza is intercepted by the Star Lord and his canine companion and informed that he must abandon his duty in order to protect the whole land from a terrible tragedy. Worrying about his wife’s decisions and skeptical of his abductor’s true purpose, Talaza can only watch and hope that things resolve peacefully.

The Citadel 7 Superverse series continues in this fifth novella, highlighting the code and behavior of the reclusive and mysterious Quall. Those that have been following the story will be familiar with the world and some of the more prominent characters already, but because of the nature of this series, it’s not at all prohibitive for newer readers to start here and work their way through the other books at their own whim. Despite the shorter form of a novella, the author does a splendid job of building out the world of Tora and its differing races, cultures, and natural features. Blending the genres of science fiction and fantasy, this story is an imaginative, entertaining read and worthy of consideration for any reader who likes to be thrust into an unfamiliar situation, working out the details as they go along.